Tiegrabber Podcasts Year Old True Crime Storytelling
By Tiegrabber Podcasts. Discovered by Player FM and our community — copyright is owned by the publisher, not Player FM, and audio is streamed directly from their servers. Hit the Subscribe button to track updates in Player FM, or paste the feed URL into other podcast apps.


MP3•Episode home
By Tiegrabber Podcasts. Discovered by Player FM and our community — copyright is owned by the publisher, not Player FM, and audio is streamed directly from their servers. Hit the Subscribe button to track updates in Player FM, or paste the feed URL into other podcast apps.

When Noura Jackson was a child, her mother’s life revolved around her. Noura’s parents had divorced when she was just a baby and she rarely saw her father, so the mother-daughter relationship was strong. But then Noura became a teenager.

Most teenage girls argue with their mothers, but Noura and Jennifer’s situation was more extreme than most. Noura was distant and critical with her mother. She was drinking, using drugs, and failing academically. It seemed that the more Jennifer tried to control her daughter, the more she rebelled.

Join us at the quiet end for Memphis Matricide? Early in the morning of June 5, 2005, 18-year-old Noura called 911. Jennifer had been stabbed 50 times. A wicker basket had been placed over Jennifer’s head, leading the police to believe that Jennifer had known her killer. At a time in her life when most people are graduating from high school and enrolling in college, Noura went on trial for the brutal murder of her own mother. But the question remains: did Noura Jackson commit matricide or was someone else responsible for this viscous crime?

Support the show for ad-free and bonus episodes and more!

Record a voicemail for a future show 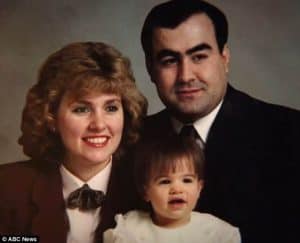 Noura as a baby with her parents

Stranger to the Truth by Lisa C. Hickman

3d ago3d ago
Subscribe
Unsubscribe
Weekly
The weekly UK True Crime Podcast, hosted by Adam, is the home of UK true crime. With a new episode every Tuesday since 2016, it is where you discover lesser known UK cases and discover new perspectives and insight on stories you may already know.
C
Crime Junkie

4d ago4d ago
Subscribe
Unsubscribe
Weekly
If you can never get enough true crime... Congratulations, you’ve found your people.
T
True Crime All The Time

4d ago4d ago
Subscribe
Unsubscribe
Weekly
Hosts Mike Ferguson and Mike Gibson guide you through the most interesting true crime stories. This is a true crime podcast that spares none of the details and delves into what makes these killers tick. Join us for a good mix of lesser known cases as well as our take on what we call the "Big Timers". We don't take ourselves too seriously but we take true crime very seriously.
C
Conviction

3y ago3y ago
Subscribe
Unsubscribe
Daily+
When John Quinney was ten years old, he took the stand to testify against his own father. He had come to believe that his dad Melvin was the murderous leader of a satanic cult. It would be decades before John would learn that his family was just one of many swept up in a panic that gripped America in the 1980s—one in which hundreds of people were accused of taking part in underground satanic cults that sacrificed infants and sexually abused children. By the time the panic had subsided, score ...
C
Crime Stories with Nancy Grace

3m ago3m ago
Subscribe
Unsubscribe
Daily
Nancy Grace dives deep into the day’s most shocking crimes and asks the tough questions in her new daily podcast – Crime Stories with Nancy Grace. Nancy Grace had a perfect conviction record during her decade as a prosecutor and used her TV show to find missing people, fugitives on the run and unseen clues. Now, she will use the power of her huge social media following and the immediacy of the internet to deliver daily bombshells! Theme Music: Audio Network
H
Hell and Gone

4m ago4m ago
Subscribe
Unsubscribe
Monthly
Now in its third season, Hell And Gone is a podcast from iHeartRadio and School of Humans that follows writer and private investigator Catherine Townsend as she investigates unsolved deaths. This season, she investigates the death of Mitrice Richardson in Malibu, California.On September 16, 2009, the Lost Hills Sheriff's department responded to a 911 at a local restaurant where 24 year old Mitrice was behaving erratically and refused to pay her bill. Police took her to jail then released her ...
T
The Trail Went Cold

4d ago4d ago
Subscribe
Unsubscribe
Monthly+
Ever click a link and think… "Uh oh!" "What the Hack?" is a new podcast that makes getting scammed, hacked, phished or cyber bushwhacked seem a little less terrifying. You might even have fun. It's one part true crime whodunnit (or what happened) and one part how to fix it. Every week the "What the Hack?" crew talks to fascinating people about some of the most terrifying (or annoying, embarrassing, infuriating) things that ever happened to them in cyberspace. "What the Hack?" tells you what ...
T
True Crime Obsessed

1d ago1d ago
Subscribe
Unsubscribe
Weekly+
The true crime / comedy podcast YOU NEED IN YOUR LIFE. We recap your favorite true crime documentaries with humor, sass, and heart. FROM VULTURE: "It’s not wrong to laugh when you’re listening to a true-crime podcast. Or at least I hope it isn’t, because if almost crashing my car while listening to True Crime Obsessed is wrong, I don’t want to be right." Hear our take on "Abducted in Plain Sight," "The Ted Bundy Tapes,"Dirty John: The Dirty Truth" and so many more.
S
Southern Fried True Crime

9d ago1w ago
Subscribe
Unsubscribe
Monthly+
Erica Kelley is a native Tennessean exploring historical and contemporary true crime in the South. Southern charm is attempted but southern sass is bountiful. Join her as she shows you just how southern fried the justice system can be in the Deep South.
Listen to 500+ topics