Music History Robert Greenberg History Society Music Music Industry
By Robert Greenberg. Discovered by Player FM and our community — copyright is owned by the publisher, not Player FM, and audio is streamed directly from their servers. Hit the Subscribe button to track updates in Player FM, or paste the feed URL into other podcast apps.


MP3•Episode home
By Robert Greenberg. Discovered by Player FM and our community — copyright is owned by the publisher, not Player FM, and audio is streamed directly from their servers. Hit the Subscribe button to track updates in Player FM, or paste the feed URL into other podcast apps. 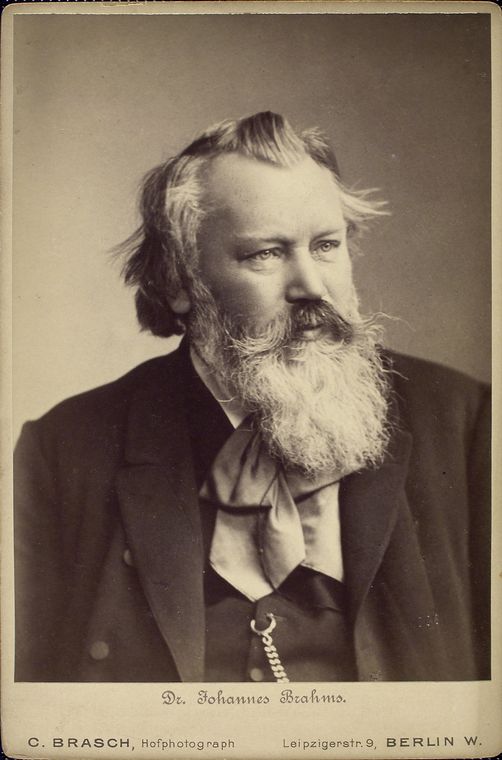 We mark the world premiere – on October 25, 1885, 136 years ago today – of Johannes Brahms’ fourth and final symphony. Performed by the superb Meiningen Court Orchestra, the performance was conducted by Brahms himself. It went well.

We’ll get to Herr Doktor Professor Brahms in a bit. But first, some gratuitous, auto back slapping.

I began writing these Music History Monday posts in September of 2016. That was when Melanie Smith, President of San Francisco Performances (for which I am the Music-Historian-in-Residence) asked me to write some sort of regular feature for SFP’s Facebook page. Here’s the first paragraph of my first post: a celebration of the birthday of Anton Diabelli (1771-1858, as in Beethoven’s Diabelli Variations) that appeared on September 5, 2016:

“Welcome to what will become a weekly feature here on the San Francisco Performances Facebook page, ‘Music History Monday.’ (As titles go that’s about as thrilling as root canal, but it is an accurate description of the feature’s content so run with it we will.) Every Monday I will dredge up some timely, perhaps intriguing and even, if we are lucky, salacious chunk of musical information relevant to that date, or to San Francisco Performances’ concert schedule, or to . . . whatever. If on (rare) occasion these features appear a tad irreverent, well, that’s okay: we would do well to remember that cultural icons do not create and make music but rather, people do, and people can do and say the darndest things.”

(For our information, I began writing these Music History Monday posts a full two years before I signed on with Patreon.)

I will say with no small bit of pride (deadly sin though it presumably may be) that I have not missed a single Monday since, making this my 267th consecutive Music History Monday post.

(Although no questions, please, as to whether or not I “have a life.”)

The five-year life of this post means a couple of things. First, in less than two years, I will begin my second cycle through Monday dates. Having already plucked the low-hanging topics my first go around, I’m going to have to work a bit harder to find date-appropriate topics to write about. Second – and on these same lines – it means that I’ve already covered a lot of topical ground.…

See the full transcript, only on Patreon!

The post Music History Monday: Johannes Brahms and his Symphony No. 4 first appeared on Robert Greenberg.

20h ago20h ago
Subscribe
Unsubscribe
Daily+
An independent radio station from Tel Aviv. For music lovers by music lovers.
O
On this day in Blues history

8m ago8m ago
Subscribe
Unsubscribe
Daily+
What happened on this date in the history of the Blues?
M
Maed in India

5d ago5d ago
Subscribe
Unsubscribe
Monthly+
Maed in India - India's first indie music podcast that showcases the best Indian independent musicians from India and abroad. Each episode presents an interview with an artist/band along with an exclusive stripped down session or acoustic renditions of their original music. The weekly show prides itself on being the destination for new music, little known stories, and unreleased music never heard before. It features all kinds of artists from new-comers to veterans and under a variety of genr ...
F
Flashback Requests (Barry James)

2d ago2d ago
Subscribe
Unsubscribe
Daily+
Barry first found music when he borrowed his sister's record collection when he was about eight and was hooked. When Caroline started it was a new beginning, and he listened to all the stations, but Caroline was his favourite by far. Later he became a singer in a band, then started doing discos when he was 18. He joined Caroline in 1977, touring the country with the Caroline Roadshow for 10 years, having great fun. Barry helped with tender trips and worked on the Ross Revenge in '84 and '85. ...
C
Coverville: The Cover Music Show

1d ago1d ago
Subscribe
Unsubscribe
Monthly+
Get the best in independent artist cover songs every week on the Coverville podcast!
I
Independent Music Podcast

4d ago4d ago
Subscribe
Unsubscribe
Weekly
A weekly show that brings you ten new tracks from artists from across the world. We cover every genre conceivable, from abstract techno, mutated dancehall, dark metal to Chinese bin lid music or something else - if it's recorded outside of the major label system, we're up for playing it. You'll find music you love, music you don't understand, and music that'll change your life.
T
That's Not Metal

7d ago0w ago
Subscribe
Unsubscribe
Weekly
The world’s best rock & metal podcast bringing you all the latest news, cutting edge opinions, honest reviews and laughs every Friday. 100% passion, 100% honesty, 100% of the time. Join us. @notmetalpod on Twitter & Instagram. Come join the discussion with a likeminded community of music fans on the That's Not Metal Facebook Focus Group www.facebook.com/groups/TNMFocus/.
A
All Songs Considered

5h ago5h ago
Subscribe
Unsubscribe
Weekly+
Hosts/nerds Bob Boilen and Robin Hilton are your friendly music buddies with the week's best new music discoveries, including conversations with emerging artists, icons and more. Hear songs that can completely change your day, with humor, heart and (sometimes) a whole lot of noise. Directions for use: Morning commute, the gym, or alone time. (If rash persists, discontinue use.)
T
Too Much Rock

11d ago1w ago
Subscribe
Unsubscribe
Weekly
The Too Much Rock podcast is a 30-minute journey through the weekly music acquisitions of its creator. It may feature power pop, indie rock, post punk, indie pop, or any other named or unnamed genre.
N
Nothing But The Blues

7d ago1w ago
Subscribe
Unsubscribe
Weekly
Nothing but the blues, from the earliest to the latest, all genres
Listen to 500+ topics